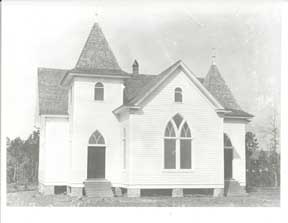 On February 16, 1913, 35 charter members organized Indian Trail Presbyterian Church. J.P. Boyd donated the land, and a building, still in use today, was completed in 1916.

Originally white frame, the building was remodeled between 1934 and 1938. A basement was excavated for Sunday School rooms, and the exterior was veneered with quartz stone. Stained glass windows were installed in 1957.

At first, the Indian Trail Church and Siler Presbyterian Church, near Wesley Chapel, were grouped and served by the same minister. The two churches had a manse at Indian Trail on Education Drive, a block from the church’s current location. Indian Trail built a new manse beside the church in 1957, and it was occupied by the church’s first full-time minister in 1961 when the church became self-supporting.

Indian Trail Presbyterian Church is truly a ministry of the people as the congregation is united and active in worship, study, and outreach activities. Now numbering more than 120 members, it still has many families representing the charter members of the church.